When you see an image of a classic log cabin, what does it bring to mind? Probably a combination of old stories you heard in elementary school history about early American settlers and the birth of Abraham Lincoln. Or maybe it evokes fond childhood memories of creating little rural towns with your set of Lincoln Logs.

While it may have a slightly different meaning for everyone, it’s no secret that the log cabin holds a prominent place in the heart and history books of traditional American culture! It has come to symbolize the distinguished values our country celebrates and protects the most—the right to and preservation of life, liberty, and the pursuit of happiness.

Take a few minutes to absorb the colorful and interesting history of the log cabin, and then head on over to our website to invest in one of the many portable cabin options we have available to best fit your needs! 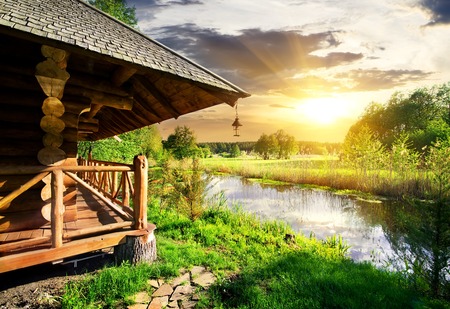 While there isn’t a definitive consensus on the inception of the log cabin, most historians agree that the first ones in North America were built by a Swedish colony that settled in Delaware. Globally the structure has roots in several European and Scandinavian countries. It was brought to America around 1638.

Following the Revolution, the log cabin became the standard American home—particularly for backwoodsmen—as a large number of settlers moved westward and took up residence in the thick forests of the Northwest Territory.

The Nothnagle Log House in Gloucester County, New Jersey, is believed to be the oldest known log cabin still standing in the United States. It is thought to have been built sometime between 1638 and 1643 and holds a spot on the National Register of Historic Places.

Early log cabins consisted of a simple design—typically a one room structure with a door, loft for sleeping, and sometimes one or more small windows. The first colonists did not have a wide range of building materials available to them. The wood for cabins came from primarily pine and spruce trees, and the ax and adze were the principal tools used for construction.

Logs were stacked on top of one another and fastened with notched ends or wooden pegs as a framework, as nails did not yet exist. Once fully constructed, pioneers “chinked” the walls—the process of filling the spaces between the logs with mud or clay, sometimes encased around wood chips or flat stones.

The floor was packed down with clay and any windows covered with greased or oiled paper, which provided some insulation and allowed light to stream in before the manufacturing of glass. An open stone fireplace was built for the interior to heat the cabin and use for cooking.

The log cabin became the standard home for early American settlers, and its function quickly progressed to other types of buildings—churches, mills, government buildings, schools, etc. They also became widely used and customized by pioneers as horse stables and, in the South, tobacco barns.

As we mentioned earlier, the log cabin came to prominence as a political and national icon in the early to mid-19th century. William Henry Harrison used his residence in a log cabin as a means of connecting with frontier people and showing them support during his presidential campaign. This tactic eventually got him elected and was adopted by later presidential candidates like Abraham Lincoln and Andrew Johnson, among others.

The log cabin became the emblem of the hard-working American, pioneering spirit, and humble beginnings for the entire country. It has been adapted and transformed into the modern log home, which is built far more easily with pre-made construction designs and mass manufactured logs that are pre-cut for easy assembly.

Secure yourself some extra space for storage, a convenient and reliable home for camping trips, or just a gorgeous, multi-functional, rustic accent for your property. At Deer Creek Structures we offer both prefab and custom-built portable cabins made with quality craftsmanship reminiscent of the pioneers themselves!

Call or visit us today to learn more about the skills, experience, and superior structures we have to offer!