Throughout history, men traditionally rode horses more than women, whether for transportation, work or sport, but in recent years that has begun to shift. Nowadays, more than 80 percent of horse riders are women, as the fairer sex has shown a natural aptitude and love for riding horses. 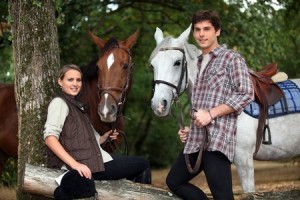 One question that no one likely considered, though, is who does the horse prefer as a rider? Scientists at the Vetmeduni in Vienna asked this question in 2014 and set to test the stresses each gender put on horses while competing an obstacle course.

Interestingly, in the end, the results were essentially the same. Horses showed similar results no matter which gender was in the saddle in a slightly surprising result. The results were published in the Journal of Comparative Exercise Physiology.

As Science Daily wrote when reporting the survey, it was previously assumed that women were more sensitive riders than men, so it was expected that the responses from the horse would be different. The test examined eight horses and 16 riders, with each horse jumping a standard course with obstacles twice. Each horse was ridden by a member of each gender.

The scientists monitored the stress levels in the horse, checking their amounts of cortisol and saliva, along with heart rates. While the horses did show some stress in completing the obstacle courses, the increases in stress indicators did not differ significantly from gender to gender.

That is actually a good thing for modern equestrian sports, where male and female riders often compete directly against one another. It shows that the competitions are truly gender-neutral and at the end, comes down strictly to the riders’ abilities along with his or her connection to the horse.

At Deer Creek Structures, we’ve helped countless men and women alike find the perfect stable or barn to house their horse companions. Our structures can be put on any property and are built using only the highest quality of materials so you can trust on them to last for many years of use. If you need a safe, solid and cozy place for your horse to live, contact us today by calling 254-546-2276.